7 Snippets from The Gentleman’s Magazine, December 1812

I spotted some interesting pieces in the Dec 1812 edition of the above publication, showing that life in the Regency wasn’t all ball gowns and masquerades. In fact, you could say these reports show clearly how dangerous and uncertain the times were.

A fatal stampede occurred on 29th November. It was reported that the church at Falmouth, in the process of being enlarged, caused the old wall to become weakened: ‘part of the plaster having fallen down, the congregation, alarmed, made a sudden effort to rush out: in the confusion many were trodden down, and taken up apparently lifeless; four have since died; and 15 persons were dangerously bruised. 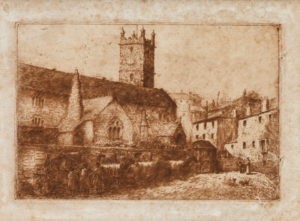 November 29th  brought ‘nocturnal depredations’ in the West Riding of Yorkshire: a cloth manufacturer, a shop-keeper, a farmer, and several other gentlemen, had their houses ‘entered and plundered of arms and money by a gang of four men, supported by others on the outside.’ Was this an example of organised crime, targeting the wealthier members of society, or, more likely, Luddites attacking supporters of the new technology that had destroyed their means of making living? Certainly 1812 was a year of particularly violent protest in the West Riding.

On December 1st a soldier stationed at Hythe, ‘owing to the darkness, fell into the canal and was drowned.’ 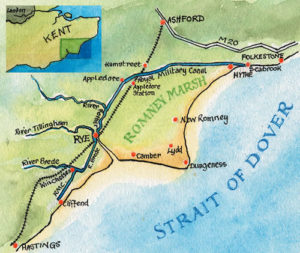 The canal in question was the Royal Military Canal, conceived as the principal element of the coastal defence of Kent and Sussex against the threat of French invasion. 28 miles long, it runs from Seabrook in Kent to Cliff End in East Sussex. The canal was intended to act as a defensive line, by helping to contain the enemy on Romney marshes, should they ever succeed in invading. The soldier himself was a member of the Royal Staff Corps, whose barracks were at Hythe.

On December 3rd, a ‘respectable miller… was murdered on his return from Wolverhampton market by a footpad about a mile from his home in Bridgnorth’. He was reported to have been ‘shot through the body’.

On a slightly lighter note: between nine and ten o’clock at night on December 6th, a meteor appeared in the air in a Northern direction from Exeter, which caused considerable alarm. Perceptible for nearly two minutes… as large as a full moon, and very brilliant, resembling a ball of clear fire and diffused a light that illuminated the earth to a great distance and emitted a sulphureous heat…  it afterwards took its course upwards and retired into a cloud. 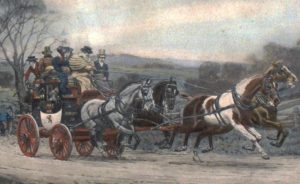 On December 13th, as a Manchester coach was going into Liverpool, it was overturned ‘owing to the inebriation of the coachman, by driving quite off the paved road and a respectable gentleman of Oldham was killed and several other passengers dreadfully bruised. Sadly, drunk driving is not a new phenomenon.

Finally, there was some good news: a charitable society for the gratuitous distribution of blankets was founded at Norwich and ‘upwards of 2000 blankets have been distributed to the necessitous.’ One wonders at the level of poverty that so many blankets were required.

My stories deliberately do not dwell on the grimmer aspects of Regency life, but I am very much aware of how awful life was for many people of the period.