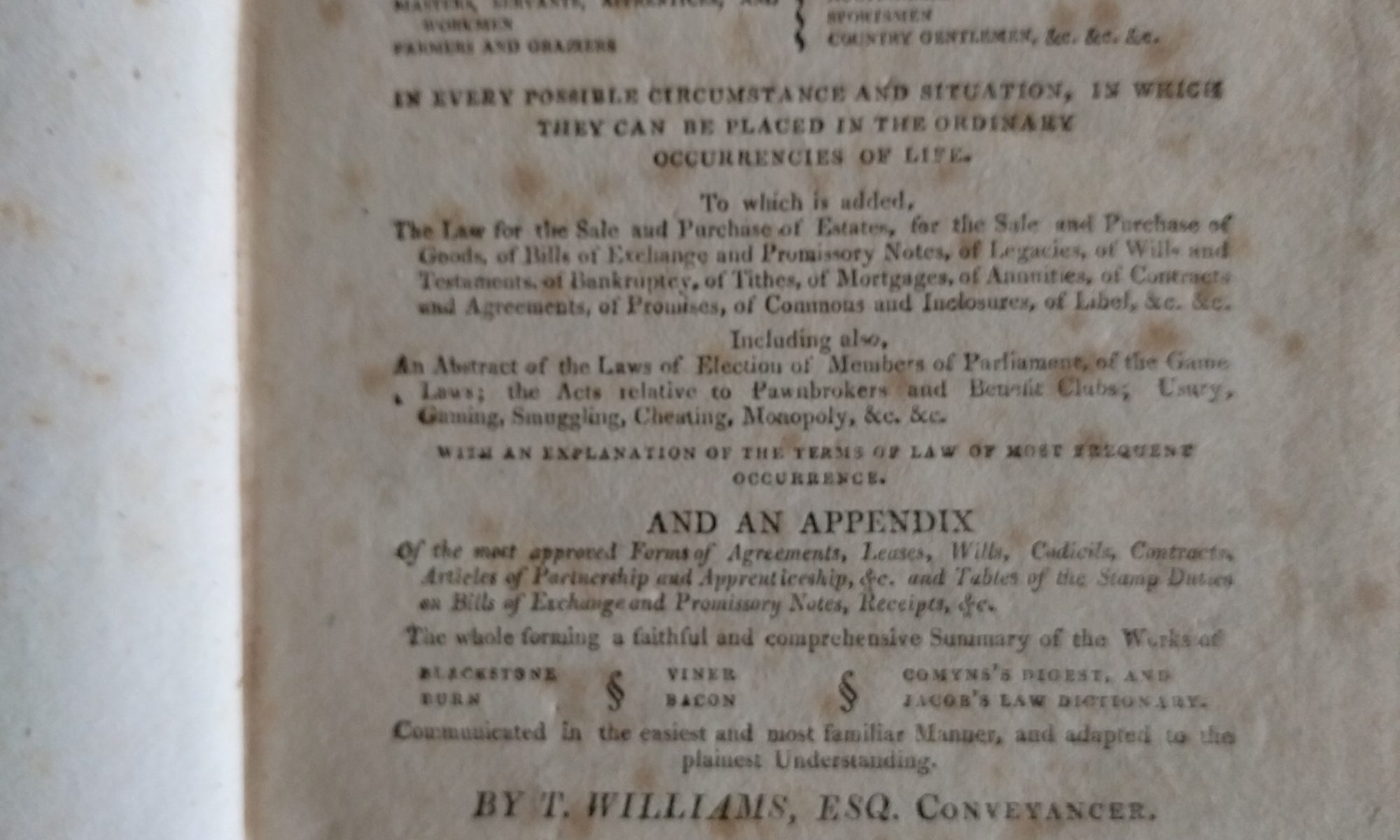 To help with research, it’s always useful for a writer of historical novels to have a few old books to hand. Well, that’s my excuse for haunting antiquarian and second-hand book sites and shops, and spending hard-earned cash on decrepit and worn volumes (the only sort I can afford). To be honest, I started buying old books quite some time before I started writing seriously. I just love going through them and discovering what readers of the 1800s were looking at.

One of my acquisitions is a very battered copy of Every Man His Own Lawyer; Or, Complete Law Library by T. Williams, Esq. Conveyancer. Published in 1812, this volume aims to explain the law in everyday language. It describes its contents as being, Communicated in the easiest and most familiar Manner, and adapted to the plainest Understanding.
I would ague that it was aimed at the literate middle classes, and I doubt whether the common labourer would have had the education or vocabulary to understand all the contents.

A chapter that caught my interest covered Nuisances. Now, if you ever get whisked back in time, you want to make sure you don’t break any laws, so here is my brief guide to these Common nuisances.
A Common nuisance defined to be an offence against the public; either by doing a thing which tends to annoyance of all the king’s subjects, or by neglecting to do anything which the common good requires.

To start with, all annoyances in the highways, bridges, and public rivers, either by obstruction or want of repair, are nuisances. I can’t see much to complain about there — I’m not intending to cause an obstruction when I travel back in time.

The keeping of hogs in any city or market town, is indictable as a public nuisance.
Again, I’m not planning on keeping pigs, so that shouldn’t be a problem. But the fact that there is a law against doing so, indicates that at some point, people were doing this. The population was moving away from rural areas, where keeping pigs, or at least one pig, was normal practice for a family’s survival. When employment in the countryside became scarce, families were forced to relocate to the overcrowded cities. Keeping a pig in conditions that were barely suitable for humans, would definitely have proved a nuisance to one’s neighbours.

All disorderly inns or alehouses, bawdy houses, gaming houses, stage plays unlicensed, booths and stages for rope dancers, mountebanks, and the like, are public nuisances.
Gosh, these sound like fun! I can only assume there must have been a fair few disorderly inns and bawdy houses around. Ale and gin were cheap and plentiful, while water wasn’t always safe to drink. Working in a bawdy house was sometimes the only way a desperate female could earn a living.
I’m not a rope dancer, so that’s all right, I have enough problems staying upright on two feet, never mind balancing on a rope. But what is a mountebank? The dictionary definition is ‘a person who deceives others, especially in order to trick them out of their money’. Selling patent medicines or similar would come under this. Confidence tricksters abounded then, just as they do now.

Inns may be indicted, suppressed and innkeepers fined, if they refuse to entertain a traveller without a sufficient cause.
I find this unusual. Why would an inn refuse business, other than for it being full?

All pretended lotteries are declared to be public nuisances (a licence from the stamp-office was required for the sale of lottery tickets). Anyone caught without a licence and convicted could be fined 100 pounds.
Some types of lotteries were known as ‘little goes’. These were declared public nuisances. Anyone involved in setting one up, or allowing one to be played at his house, will be fined and deemed a rogue and vagabond.

If any editor of a newspaper, or other person, advertises any illegal scheme of gaming in the lottery, he is subject to a penalty of 50 pounds.
I suppose this would come under Advertising Standards these days.

The making and selling of fireworks and squibs, or throwing them about in any street, is, on account of the danger that may ensue to any thatched or timber buildings, declared to be a common nuisance. Punishable by fine; for making and selling 5 pounds and for throwing or firing them 20 shillings.
This is, I think, self-explanatory, and understandable. Many houses in towns and villages were timber-framed and thatched. The threat of fire was ever-present.

It is a public nuisance to suffer any mischievous dog to go unloose or unmuzzled, to the danger and annoyance of the neighbours or passengers. An owner could be indicted and an action for damages could be brought. But an action could only be brought against an owner if the owner had received notice of his dog having bitten somebody at least once before. So it sounds like a dog was entitled to one bite, before being declared a nuisance — though I pity the poor person who was the first to be bitten with no chance of redress! Similarly, an action could be brought against an owner who kept a dog accustomed to bite sheep, but only if it could be proved that the owner knew his dog had killed and wounded sheep at least once before.

Making, keeping, or carriage of too large a quantity of gunpowder at one time, or in one place or vehicle. No-one is to keep more than two hundred pounds of gunpowder, nor any person, not a dealer, more than fifty pounds, in the cities of London and Westminster, or within three miles thereof; or within any other city, borough, or market town, within one mile thereof; or within two miles of the king’s palaces or magazines; or half a mile of any parish church; on pain of forfeiture, and two shillings around; except in licensed mills.
I was a little shocked to discover that this was classed as a common nuisance. But of course, the keeping of gunpowder was normal at this time. Many people in Georgian Britain carried guns, unlike today, thank goodness.

Eaves-droppers, or such as listen under walls or windows, or the eaves of houses, to hearken after discourse, and therefore to frame slanderous and mischievous tales. This nuisance sounds strange today, when sometimes it feels like our every word is monitored. Televisions, mobile phones, and computers constantly track our behaviour — I’d be happy to bring this law back. Offenders in 1812 were punished by fines and sureties for their good behaviour.

A common scold is a nuisance to her neighbourhood: for which offence she my be indicted; and if convicted, may be placed in a certain engine of correction called the trebuchet, castigatory, or cucking stool, which in the Saxon language is said to signify the scolding stool; though now is frequently corrupted into the ducking stool, because the residue of the judgement is, when she is so placed therein, she shall be plunged in the water for her punishment.
This was the nuisance I found most shocking for its sexism and misogyny. A scold was automatically a woman, as seemingly a man could not cause a nuisance in this way. There is no elaboration into what constitutes scolding, so I suppose it was open to interpretation. The punishment was pretty awful too. I had no idea that the ducking of so-called scolds was still prevalent at this time.

So there you go. Some things would be applicable today, but some are not, and could easily catch a time traveller off guard. If you do go back to 1812, remember: don’t keep pigs, don’t rope dance, don’t sell lottery tickets, don’t listen to conversations not intended for you… and, above all, if you are a woman, be careful what you say!